Hey everyone. And welcome to the latest episode of the ForCollegeForLife podcast. My name is Casey Cornelius. I am the founder and president of ForCollegeForLife, and I have the distinct pleasure of getting to interview the speakers and consultants who make us, who we are in this episode. One of our fast 15 episodes, we get to talk to Jay Harris about some topics that we think are particularly interesting for certain students. We’re, we’re getting into that in just a second. So I’m not gonna go into all of Jay’s bio and everything like that. I will, however, make sure that there is a link to his full interview in the podcast notes, wherever you’re finding this podcast. But here’s the thing Jay’s professional journey has not been necessarily a linear one. In fact, it has had a series of reroutes to where he is now as an anchor on ESPN sports center. So, Jay, here’s the question I have for

Think about the students who are overachievers. Maybe they’re the ones who’ve got everything planned down to the T you know, like since they were 12 years old, they’ve been planning out their collegiate journey and now they’re on campus and they’re discovering that maybe they want to change their major or maybe they wanna join an organization that wasn’t part of the original plan or do an internship or take a job or whatever it might be. What advice would you give that student?

First I would go <laugh> you’re toast now. I’m kidding. <Laugh> I would go, wow. Casey, how did you know me in college? Because a lot of that you just described me. I, I would say don’t be afraid to go off course, especially if it’s something you think you might have an interest in because you never know WestEd O saying the best laid plans of mic and men, something, something, something I have to look it up, but just because you plan, it doesn’t mean that’s what you’re gonna do. I mean, I, I knew what I wanted to do professionally and, but I didn’t know how to go about it, but I knew what I wanted to do until I couldn’t get a job. And then I decided I didn’t want to do it anymore. And then I quit and then I decided I was gonna go to grad school and then grad school told me no.

And, and I got back on my horse and kept looking for a job. So I tried, I tried to not do this cuz I just, I quit too soon. I mean, I, I, I quit period and I shouldn’t have, mm. But within my knowing one I wanted to do, I started in radio. I wanted to do TV, but my opportunity was in radio and I fell in love with radio. I had no clue about radio and I was like, this is really cool. And for a while, you know, I was like, oh yeah, I’ll just do this. And then I, the TV bug bit me again. So I said, you know, I think I should look for some opportunities, maybe just some part-time things and all of that. Re rounding and trying different things led me to where I am now. But just because you plan, it doesn’t mean that’s what you’re going to do. Sometimes it works out. Sometimes it works out for better.

I’ve heard you reference before Jay as well, that, that concept of rerouting and I’ve, I’ve heard you describe it as like, you know, imagine that you’re going the same path every day to, to work or to school or to visit friends or whatever, then all of a sudden, oh no, there’s a, there’s an accident. Or there’s construction something unanticipated that is going to force you to, to reroute to your intended destination. But, but let’s take this analogy a step further. I imagine that part of it as well is sometimes the reroute exposes you to things that you never could have imagined before.

Indeed. I mean, if something happens for driving to work and, and there’s construction and you have to go a different route, what are you gonna do? Freak out you? I mean, so, Hey, let’s have an adventure, you know, let’s, let’s go see where this new route will take us because I’ve never been this way. I might see something that’s cool. And I might decide, this is the way I’m going to work every day from that one. You, you just, you never know. I mean, even with my job now it’s, it’s the same every day, but it is totally different every day. I have no idea. Based on the night before what I would do the next morning, we could have a, we could have a plan going into the night and some crazy things happen into, in like six or seven games. And our plan is totally changed because someone threw a no-hitter someone got injured in training camp, someone retired, someone did whatever, and you just have to go with it. I mean, that’s happened. That’s happened several times when you, when we’ve sat there and we’ve written a show, we’ve got everything planned. And we walked to the set and between our walk from the newsroom to the set, there’s been breaking news and everything we’ve worked on for the entire day is gone forever. And we have rerouted into a whole new thing and we just have to go with it.

Do you, do you sometimes find that it’s better than what you’d originally planned?

Right. For those of you who are not familiar with Jay in, in his programs please go ahead and visit for college for life.com/j that’s J a Y for college, for life.com/j J I I’m going to put on the, the the helmets of this, this student who you’re talking to right now. And there’s, there’s probably a four litter word that comes to mind, begins with an F. And it sounds like ear, right? Can we talk about fear and fear of the unknown when we begin to deviate from the plan? What, what would you say to that person? Who’s like, I would, I would love to try something new. I would love to study abroad, or I would love to do extra Y or Z, but I’m, I’m afraid of deviating.

Starts with F I know, I know

I’m, I’m, I’m glad you went, where you went instead of the other one, cause that would’ve changed the whole focus of the podcast. Fear is good. Embrace fear. Mm. I mean, you, you will, if you, if you think you’re going through the rest of your life unafraid, and you can lead a pretty boring life, pretty uneventful life, fear is fun. I mean, that’s how you have to approach it. Trust me. I mean, I’m the kind of person I like to be buttoned up. I like everything to be just so, but on those days when that breaking news happens and I have no idea what’s gonna go on. I have no idea what we’re gonna say the first couple of times. Yeah. I was scared to death. And then I, I kind of went, you know what? This is fun because I, I cha I, I challenge myself.

I mean, you, you, you never know what you can do until you’re put in a position where all hell is broken loose, and, and you have to, you have to keep your head when all about you are losing theirs, inviting it on you to, to quote if by Mr. Roger Kipling, the first part of it, I mean, and that’s, that was a great discoveries. You know, when you, when you jump into something and you just jump and you just go with the wind or whatever takes you. So if you study abroad study here, study wherever. Yeah. Why not? Why not? You only live once. Why not

Go for it? I like that. I like that. Listen, if, if you’re listening to Jay for the first time, I I’m gonna translate one of the things that you, you, I don’t want anyone to misunderstand. He’s not telling you to not have a plan. You should have a

Right. And, and knowing Jay, the way that I do, Jay has plans, but also be open and receptive to a, a changing, changing route. See what happens. Yeah.

Because things will happen

Things will happen. Like we’re, we’re like, like right now, we’re, we’re selling our house and buying another one, but we haven’t sold a house yet, but we’re moving ahead with buying the other one, because that wasn’t a plan, but it’s gonna work out somehow.

It’s, it’s, it’s definitely gonna work out. Even if, even if the Harris family ends up having two homes for it’s going to work out,

I was gonna ask you to share your Venmo, but let’s not go there.

Instagram, Twitter, J Harris, ESPN. I’m also on LinkedIn, just me, J Harris with a fabulous photo of myself. If I do say so myself there you go. And Facebook that’s for the, the older brand. I’m on Facebook too.

Okay. But not TikTok or, or Snapchat or anything like that. You

Know, I do have a TikTok. I do have a TikTok and I’m trying to get better at it. It Al it’s also J Harris, ESPN. I tried the Snapchat thing. I think my account may still be active, but I’m never on it. So just

Probably Snapchat. I was gonna say, it’s probably not where to find Jay, but you have a lot of options out there. Also, we invite you. Of course, if you enjoy this fast 15 big thought with in 15 minutes or less, please go ahead like a chair and subscribe and all those other kind of things that you’re supposed to do with podcast, leave a review. And then also let us know some of the big topics that you want us to cover in less than 15 minutes, Jay Harris, less than 15 minutes. This has been fun.

Thank you. All right, everyone. We’ll talk to you soon. Have a great day. 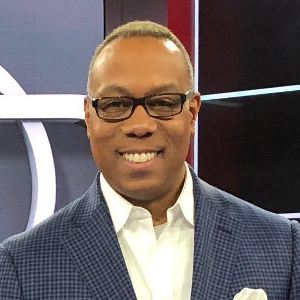