I spend a lot of time in my programs talking with audiences (mostly men) about fear. It’s an ugly, four-letter word to many and even the act of delving into the feeling of fear, let alone its causes, is difficult.

I’ve asked folks to reflect on what they are truly afraid of and the answers are almost universal at this point; failure, embarrassment, feeling weak, disappointing others, and being unfulfilled are the most frequent replies. Once they determine their fears, I ask what I believe to be the essential next question:

“What do you do when you are afraid?”

Not nothing in terms of “do nothing about the fear” but rather actually stop moving. Doing nothing feels safer than whatever is creating the sense of fear.

Nothing is safer than something.

I was reminded of this construct recently when I was teaching a Jiu Jitsu class. For those who have never tried BJJ or grappling, it is scary. The movements are hard and often counterintuitive. What your mind tells you you should be doing is absolutely at odds with what is required in the moment.

It makes zero sense…until it does.

After class, a new student approached me and shared he was having trouble with a movement called a forward roll. This specific movement requires someone to physically roll forward over their shoulder (not head!) and end in a ready, fighting position. Sounds easy enough, right?

It’s not. Especially at first.

For this student, it wasn’t only the physical dynamics preventing them from doing the forward roll but it was…you guessed it…fear. Fear of landing on their head. Fear of not being able to do something everyone else seemed to have mastered. Fear of embarrassment.

I got the sense that this fear was so profound that this student might actually quit Jiu Jitsu only a couple of weeks into their training because of it. Nothing is safer than something, right?

Not being able to let that happen, I opted to spend 15 minutes with this student working on the mechanics and mindset of completing a forward roll. And, after some trial and error, they completed it!

“Really, are you sure I did it,” they asked.

Yes. They did it. Perfectly.

What was really cool was other students who were lingering went on to tell this person that they too had a hard time at first mastering this movement. That they too had fear. And those conversations and affirmations seem to really sink in.

This stuff is hard. For all of us.

So what can we learn from this about fear?

Fear is real. The voice in your head, while a liar, is loud and clear. The “easiest” response to approaching the fear is to do nothing. To stop.

But what would you be missing if you always stop at fear?

On the other side of fear is potential. Capacity. Learning. If we always stop at fear, we will never know what is possible if we move beyond it.

Oh, and having some friends share their fears always helps also.

Fear is a liar. It is loud and clear. But it can also be overcome. 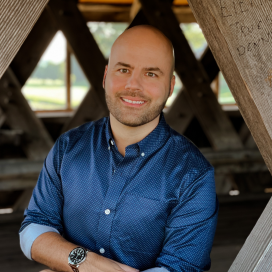 Casey J. Cornelius is a leading national voice on the topics of personal development and healthy masculinity. A proud fraternity man and member of his chapter’s Hall of Fame, Casey travels the country helping organizations and individuals be extraordinary. He serves as a “SpokesMo” (their word, not his) for the November Foundation and has received awards and recognition for his signature program Be The Man.